It seemed to me that if you had to have a mother who’d dropped you off like a bag of dirty laundry and a father who was not above stealing from you (or your sister), you were pretty lucky to have that same sister take you to Hollywood and wash your underpants with hers and share her sandwiches with you (28).

Amy Bloom is coming to town, for the Auckland Writers Festival and lovewordsmusic.com will be in the audience, dangling off every delicious, erudite word. I first discovered Bloom in a fiction class – Silver Water remains one of my favorite short stories ever. I had high hopes for Lucky Us; and – Lucky Me – hope soared and found its mark in a carriage house in Ohio crowded with achingly flawed and real characters. 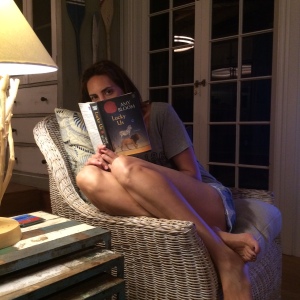 C’est moi, sneaking in a bit of reading over Easter. Image copyright to Caroline Barron

Perhaps Bloom originally found Iris, Eva and friends on her psychotherapist’s couch (Bloom’s ex-day job). These people (for they are so real they are no longer just characters) are so real and damaged that they could only exist in the strangeness of reality: they disguise themselves from themselves and others; they reinvent; they do things they hate themselves for doing; and they have unreliable memories: Iris’ letter to Eva: “I don’t have much confidence in what people remember. It seems to me, I remember some things at a gallop, some moments from Ohio bearing down upon me in huge detail, and other things are no more than small leaves floating on a stream” (130).

Even the bit-parters are so vividly sketched you can see mottle-skinned Clara at the mirror, disguising her vitiligo with heavy stage-makeup. Or Mrs. Gruber standing on the porch of the Hollywood Plaza, crème de menthe in hand, telling our two runaways that “happiness was not something she aspired to, that when we had seen as much of the world as she had, we would know that what lies right behind the horseshit is not a prize pony, my dears, it’s more horseshit (31)”.

This last passage shows Bloom’s artistry as a writer. We find Mrs. Gruber’s words embedded in Eva’s first person narration. Throughout the book Bloom weaves an epistolary element allowing us first person narration of other characters through their letters. It is through letters Bloom develops the extraordinary story of Gus, an American-born German who is extradited to Germany.

One of the several sociological issues Bloom urges her readers to think about is the weighting and value of brains and beauty between sisters Iris and Eva. Clara says to Eva:

“Your father says you’re the smart one.”

“Not the pretty one,” I said. I was mortified.

And rich Mrs. Vander tells Eva: “God doesn’t give with both hands, honey” (119). Who is better off? Who is the lucky one?

The title Lucky Us could be read as sarcastic, but I think Bloom is saying that within even floored and hideous lives, if you look – really look – you can hunt out pieces of gold within the people who love you and even within those who just manage to stick around.

I have read reviews disparaging the lack of plot. I say whaaat? Have we been reading different books? Bloom develops plot intensely through character. That’s the way – uh-huh uh-huh – I like it…

Check back in after 15th May 2015 – I’ll be covering Amy Bloom’s appearance at the Auckland Writers Festival.

Review appears on lovewordsmusic.com and goodreads.com.

Grammatically obsessed twins whose relationship breaks down, written by an award winning writer. Tick tick tick! But unfortunately this one just didn’t grab me and I found it hard going. I think perhaps I was in the wrong mood for such a quiet and quirky read. 💕📚
Somehow an 88-year-old Irish writer can stand in the shoes of an imagined kidnapped Nigerian girl (echoing the Chibok schoolgirl kidnappings of 2014), and it not feel weird or appropriative. Not only that, she utterly encaptured me. Best of the summer reads so far. 📚💕 #ednaobrien #girlthebook
Mike Chunn (Play it Strange, APRA, Split Enz) is a true Kiwi music taonga, and his memoir is brilliant! It helps that he’s a fantastic writer who knows how to wield a decent metaphor, and the natural rhythm of storytelling. Chunn weaves the story of his music/life decisions, impacted heavily by agoraphobia, into an enjoyable story about the Kiwi music scene during the 70s and beyond. A really great read, and a sure bet for the Ockhams long list at least. #readnz
Georgia’s thrilled to graduate from paddock to beach on Cookie. Riding here with her pal Luka. Well done, darling. And thanks Nardeen of Baylys Beach Horse Treks. 💕🐎🌊☀️#baylysbeachhorsetreks #theadventuresofgeorgiab
As if we need a reason to love Drew Barrymore even more. Wildflower jumps inside her life and mind to reveal what a cool, kind and very well-read chick she is. A great role model of resilience, hilarity and motherhood. Easy summer read. 💕📚🌺🌸🌼
Latest book review from @otagodailytimes 21st December 2019. Read the full review on my website www.lovewordsmusic.com.

Let’s be friends on Goodreads